Chapter 1 of a Cycling Holiday Europe: A cyclists dream for 127 kilometres on a little-known route called the Fenway through the forest. We ride on perfectly paved bike paths in Holland, peddling south into Germany, Belgium, Luxembourg, and Germany. The landscape is dotted with ancient abbeys, tidy villages with their whitewashed brick and half-timbered homes. We hopscotch along borders visiting two Imperial Cities (Aachen and Trier). With its lush forests and clean rivers, this region oozes abundance. The route meanders through high moor and grassland terrain, famous the world over for its local cheeses, cured meats and grains that flavour rich Belgian ales. Trailside cafés serve warm waffles with sweet toppings. Of course, sampling local specialities is what we do best.

Every day we bike through history. The Romans were firmly entrenched here, evidenced by fort ruins, bridges, complex bathhouses, lead and copper mines, and a 130km aqua-duct supplying fresh water to troops on the Rhine River. Later, these woods were the favoured hunting grounds of 9th-century Carolingian emperors. A motherlode of iron and coal made the region a key player in steel manufacturing during the Industrial Revolution. The many markers and memorials remind passers-by of both the destruction and liberation by Allied Forces during the Battle of the Bulge. This is a destination you won’t find on your own. It’s tucked away, straddling borders you’d never know were there…a place was mostly forgotten in the mists of time, a hidden gem in the heart of old Europe.

On Saturday we travel by train from Trier to Metz with the guides. Luggage will be transported for us.

Chapter 2: The Moselle Bikepath: The river with 3 names! Is it Mosel, Moselle or Musel?

That depends on where you are on the river as it forms a natural border with three countries we visit: Germany, France, and Luxembourg. It’s a bike and barge dream-come-true. Paved bike paths, well-marked signage and easy cycling along the Rhine’s largest tributary. Medieval market squares, half-timbered villages, gothic cathedrals and castle ruins. Wunderbar and Fantastique are the words to know!

We meet up in Metz, one of the last Roman city’s to fall to Atilla the Hun and ancestral home of the Merovingian Dynasty. Metz has great architecture from the centuries and a Gothic cathedral that took 300 years to build.

We start biking through the Lorraine region, the birthplace of French military heroine Joan of Arc. Ooh-la-la the food out here! Those wonderful pieces of bread, Quiche Lorraine, delicate Madaleine cookies and golden Mirabelle plums you’ll find in jams, tarts and a sweet liqueur—the nectar of Gods.

Onto Luxembourg, the only Grand Duchy in Europe. Its strategic position between two superpowers made it a hotly contested area to control over the ages. If you know a little French and German, you’ll understand their mother tongue—a rich soup of both languages in one pot.

And then: Germany! The lead city on this trip is Trier. Ever heard of it? You’re not the only one. Its hey-day was around the 2nd century AD. Known as Roma Segunda at the time, Trier was an Imperial Roman city. Kind of a big deal when Constantine the Great ruled from here. You will see the remnants of this glorious past in Germany’s oldest cathedral, amphitheatre, the emperor’s throne hall and famous “black gate,” the blackened remains of the ancient city wall.

Further downstream, we get to the heart of the Moselle Valley, with its picture-perfect little towns with hundreds of vineyards and wineries. Gently cycling along the Riverside, we reach our final destination at the feet of the Reichsburg of Cochem.

Even though this tour is considered easy, the 2% grade uphill for part of the ride does require some leg and lung effort. If you do not like the word “hill”, please look at our other easy bike tours OR: hire an E-bike!

E-bikes are a great way to do this tour without worrying about the effort it might take. E-bikes are trendy in Europe! They make biking as easy as you like it to be, still giving you the exercise and experience you are looking for. The type of e-bikes we use is supporting you a bit, or more, or a lot. You choose, and you still pedalling! It stops when you stop! Save and easy. If you only think of hiring one because of the hills, you might hire one just for the first part of this tour. 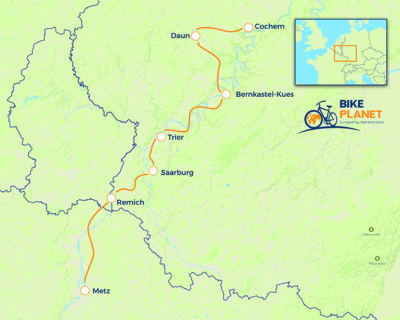 Your tour has been prepared into the finest of details. Check “about our SERVICES” for general information.

Our most important feature is the presence of 2 guides on your tour. During the first half of the tour, one of the guides is driving the van. On the second part of the tour, both guides are biking with you.

Our rates are based on one person, double occupancy of rooms.

What is not included on this tour:

Extra night(s)* in the Netherlands can be arranged on demand

Extra night(s)* in Cochem (area) can be arranged on demand

Even though this tour is considered easy, the 2% grade uphill for part of the ride does require some leg and lung effort. If you do not like the word “hill”, please look at our other easy biketours OR: hire an E-bike! You might then consider doing this only on the first part of our tour, in the onduling hilly part of this trip.

E-bikes are a great way to do this tour without worrying about the effort it might take. E-bikes are trendy in Europe! They make biking as easy as you like it to be, still giving you the exercise and experience you are looking for. The type of e-bike we use is supporting you a bit, or more, or a lot. You choose, and you’r still pedalling! It stops when you stop! Save and easy.

The only important limitation is that an e-bike is heavy, and you need to cycle and keep your equilibrium. So for un experienced novice cyclists: please practice at home, rent an e-bike and try if this will work for you!

G = Guaranteed departure
Request a reservation
Stay in touch
Get our latest news! Stay in touch with us by subscribing to our newsletter
or like us on Facebook!
Sign up
or