Bike and Barge Tour along the river with 3 names! Is it Mosel, Moselle or Musel?

The lead city on this trip is Trier. Never heard of it? You’re not the only one. It’s hey-day was around 2nd century AD. Known as Roma Segunda at the time, Trier was an Imperial Roman city. Kind of a big deal when Constantine the Great ruled from here. You will see the remnants of this glorious past in Germany’s oldest cathedral, amphitheater, the emperor’s throne hall and famous “black gate,” the blackened remains of the ancient city wall.

And then France. You feel a difference the minute you cross the border into the Lorraine region, birthplace of French military heroine Joan of Arc. And, Ooh-la-la the food! Those wonderful breads, Quiche Lorraine, delicate Madaleine cookies and golden Mirabelle plums you’ll find in jams, tarts and a sweet liqueur—the nectar of Gods. We finish in Metz, one of the last Roman city’s to fall to Atilla the Hun and ancestral home of the Merovingian Dynasty. Metz has great architecture from the centuries and a Gothic cathedral that took 300 years to build. 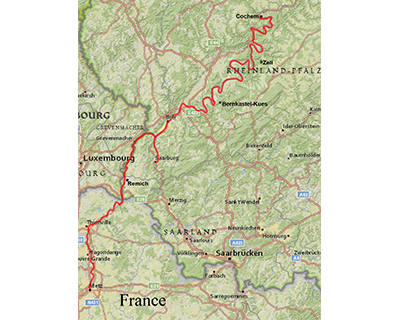 OPTIONAL:
Bike rental is NOT included: see above

E-bikes on request & availability: see above

Please ask if you want to bring your own bike, with regular sizes this should be possible.

The Bike & Barge tours do not use a Van. Guests can stay onboard instead of biking. On some days a pick-up or later drop-off is possible. The guide will explain every day!
G = Guaranteed departure
Request a reservation
Stay in touch
Get our latest news! Stay in touch with us by subscribing to our newsletter
or like us on Facebook!
Sign up
or